icon by @caution-cake on tumblr 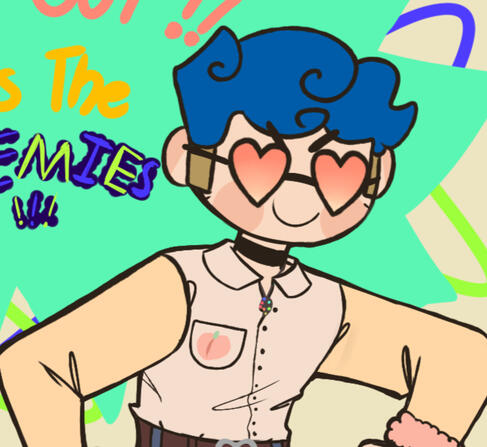 let's be lucky people, me and you

i'm james but i'd rather you call me jaime! salt is a kin name that i actually just use as a joke kjhkshddsds you can call me salt if you want but it's not preferred (although its a fuckin powermove)

i'm a 13 y/o trans bi guy. i go by he/him and im trying out xe/xim/xis pronouns!!!
im autistic, and i have depression and paranoia (all self dx) and im just out here trying to live my best life!!!!
if my age makes you uncomfortable its fine to ask me to unfollow you or to not follow me!!!

i would rather not have anyone try to dm me or talk to me privately. it triggers my paranoia and i'll probably end up accusing you of things, giving short responses or just straight up blocking you. it's nothing personal!!

the only exception to this is if youre going to commission me!! im fine with dms if they're commissions, but otherwise i don't want to talk in private!!

they're not all triggers necesarially. some of them are just viscerally upsetting

things i'd rather you avoid:

if you're going to post about these things or reblog a post mentioning them, i block the tags "jaime don't look" and "jaime dont look". direct tags that tell me what the post is abt dont stop emotions tm from being triggered, especially if it's a paranoia trigger

main tumblr
art tumblr
trendercore/interests tumblr
insta
discord server
youtube
~
character ask blog (run with @caution-cake)
character aes blog
artfight
toyhouse
my picrew
~
paypal (do not pay commissions through this!)
patreon
ko-fi
holy shit WHY do i have so many